Scenic wildlife, here inside Bardiya, a potential threat outside the reserves.

Wild animals lurk as a real threat to villagers living near some of Nepal’s national parks and local forests. In some districts, the risk of animal attack even exists inside the local towns. These attacks are a tragic reminder of how difficult it can be to achieve peaceful coexistence where human settlements and animal territories overlap. Last month alone witnessed several attacks involving all of Nepal’s “big five”: 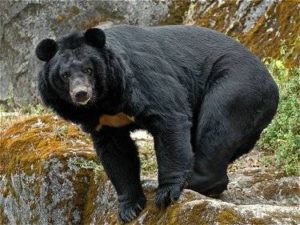 Local threat to villagers and their livestock: the Himalayan Black Bear

BEAR. On January 30, a 54-year-old man in Salyan district was attacked by a bear just outside his home. He was the fourth villager in his area to be injured by the animal! Says one of the locals: “A bear along with a cub keeps entering the village in the evening after 5, attacking anyone it comes across”.

Calm one second, charging the next: scenes from a rhino attack in Chitwan.

RHINO. On January 28, a 35-year-old woman in Chitwan was out on her daily routine, collecting cattle fodder inside the jungle area, when she encountered a rhino. Many villagers who live near the jungle collect fodder, and rhinos are a quite common site. But in this case the rhino charged – and the woman was killed.

The elusive leopard hunts even inside human settlements and sometimes attacks occur, as here in Kapan.

LEOPARD. On January 8, four men were injured as a leopard was cornered and turned aggresive in a village in Kanchanpur district. Indeed, leopards are a real threat far beyond local forests and national parks. Last summer, a leopard attack occurred as a 61-year-old woman was stalked and killed just outside her village home at 10 at night.

The tiger can be observed in some safety on elephant back or motorbike like here in Bardiya, while encounters on foot can prove fatal.

TIGER. On February 7, one police officer and two other men were injured while trying to capture a tiger that had run amok in a village adjacent to the Parsa Wildlife Reserve. In fact, they were lucky. Last November, a 45-year-old man in a Nawalparasi village was killed by a tiger when out collecting grass for his cattle. 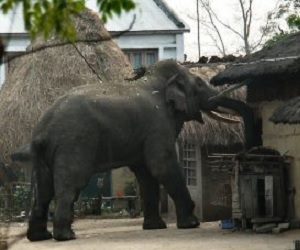 Elephant – darted with a sedative – after raiding a village in Bardiya.

ELEPHANTS. Wild elephants – the last of the “big five” – are in fact responsible for the highest number of fatalities as well as destruction of crops and houses. For example, just before New Year, a herd of elephants ravaged through a small town in Bardiya district, killing one man and injuring two others.

How big, though, is the risk of animal attack? Indeed, in the country as a whole it is quite low. One study shows that from 2010 to 2014, elephants – on top of the list – attacked 27 people a year on average, killing 18, while tigers – at the bottom – attacked 9 people a year, killing 5. So, the risk is relatively low.

But locally, the threat of animal attack can be a huge issue. In villages around the jungle reserves in Chitwan and Bardiya, villagers have struggled with elephant herds for decades. Using torches and loud instruments, they sometimes manage to scare the heards away. But every year entire villages are badly hit!

Two Tharu villages attacked by elephants last September lost loved ones, houses and crops but also their feeling of safety. Said one villager: “Elephants come at any time. They don’t care about day and night. This has stolen peace out of our lives.”

Animal attacks have become more frequent over the last two decades or so. Animosity towards these beautiful wild animals is part of the result. Villagers have staged retaliatory attacks sometimes deep into the reserves, killing 17 elephants in the last few years, as a case in point, just as many locals demand of the government to take action. 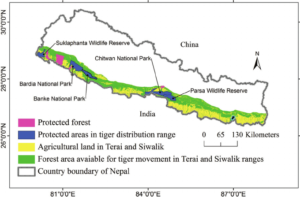 Growing animal populations and forest corridors are part of why animal attacks are going up.

But why has the number of wild animal attacks grown? One cause is that more people have settled near to where the animals live; another that animal populations have grown, pushing more animals outside the natural parks in search of food and territory; and a third is an increase in forest cover which is allowing animals to scatter over wider areas.

It is necessary to keep animal populations down now, said Krishna Acharya, former head of Nepal’s Department of National Parks and Wildlife Conservation, back in 2013. The number of animals is not huge – tigers count around 200, elephants not more than 125, rhinos around 650 animals – but the habitat avilable is limited, so there’s not space for many more! 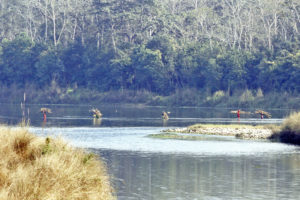 Another part of the problem: human activity moving closer to forest reserves, here locals with firewood from inside Chitwan National Park.

Conservationists are celebrating Nepal’s success in protecting its endangered mammals. The population of tigers, elephants and rhinos has increased sharply over the last ten years. But the flip-side of the coin is, paradoxically, that this very success may lead authorities to deem culling of the populations necessary to protect human lives.

Has the authorities, though, started culling the populations? Not to our knowledge. Instead, it has pledged to double the tiger population by 2022! One study says electrical fences around livestock and houses, proper storage of food items that attract elephants, and better tools for scaring off the animals, may help. But will that be enough?

Says Krishna Acharya on Nepal’s animal conservation: “The time has now come for us to determine how many such wildlife species we can have in our protected areas.” The attacks just last month involving all of Nepal’s “big five” underlines that the question of how to solve the intensifying conflict between humans and wild animals is as acute as ever.

“The numbers of rhinos and tigers are increasing in the national park and they are moving out in search of food and space. Meanwhile, the increasing human population needs more of the natural resources available, and that competition creates conflict.” Krishna Acharya, former head of Nepal’s Department of National Parks and Wildlife Conservation.

“We are used to the elephant menace. People have died even earlier. The recent incident has only added to our losses and refreshed our sorrows and fears. The government cannot provide security and we can’t evacuate our ancestral place. This has complicated the problem.” Shyam Chaudhari, Suryapatuwa VDC, Bardiya.

PS: Wild animal attacks are tragic and the risk extremely scary. But even if taken together, Nepal’s “big five” are a much smaller threat compared to the country’s venomous snakes. No certain data is available, but health authorities estimate that 20,000 mostly villagers are bitten every year and 1,000 do not survive.