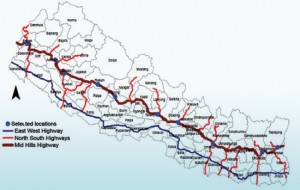 Over steep hills and across deep valleys: Mid-hill Highway

It can seem almost impossible considering the terrain of steep hills and deep valleys, but it’s nonetheless a fact. The Mid-hill Highway – going from East to West across the interior of the country – is getting nearer completion! The Mid-hill Highway is now bending its way from Chiyabhanjyang of Panchathar in the East to Jhulaghat of Baitadi in the Far-west – a distance of 1776 km. – through a total of 24 districts and 225 VDCs, directly affecting 7 million people! How near completion is it? Well, it remains a bit unclear, but large sections are already in use!

The Mid-hill highway – also called the Pushpalal highway – was initiated under the Maoist government after the 2008 election. It’s envisaged as an “artery” to infuse many of the less accessible and often stagnant communities in the Mid-hill area with growth “oxygen”. Marked by low income and increasing out-migration of unemployed youth, as well as poor access to public services, these communities are expected to benefit from the easier access to markets in Terai and elsewhere. The overall idea: to help local people earn an income where they live! 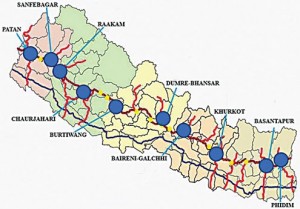 On the drawing board: Ten “model cities” along the Mid-hill Highway

Has the “oxygenation” in the many hitherto remote districts and villages started? Indeed, it has in many parts, MyRepublica reports. Shorter distance time-wise to markets in district towns and in the Terai is already stimulating economic activity. It’s become cheaper and quicker to get produce to the market towns – from apples to herbs – just as more buyers are making their way up into Mid-hill villages to stock up. The value of the land along the highway is also rising, in some areas five times or more! In fact, in some locations the price of land might rise even further. The government is planning to build ten “model cities” along the Mid-hill Highway, from East to West, as shown opposite.

The purpose of the model cities? Well, they are envisaged to serve as growth centres attracting locals to stay in the Mid-hills and to contribute to building their local economies and communities, as opposed to migrating to Kathmandu, to the Terai or abroad. Will the Mid-hills start to undergo a larger transformation? Well, optimism is rising and with a new road, who knows what the future will bring!

“As our village is now linked with the highway, I have planted 50-60 apple trees. If this turns profitable I will plant apple trees in 10 ropanis as I can now transport them to other markets due to easy road access…” Local farmer interviewed by a MyRepublica reporter.

go Nepal go………
My blessing is with you……

Alll location give me

I got our gifts to the mom concerning Christmas time mainly because she was per jewelry freak. Some sort of one thing she does not wear much out of was, bracelets. I bought this girl that charm bracelet furthermore when she opened up that it yesterday she absolutley liked things! Now the problem was, her getting that at plus off of by by herself. Haha… total ideal system, they shipped and also came massively very early as well as the mom was experiencing things. Thank you.