Home Culture and Change The loss of the old village house

The loss of the old village house 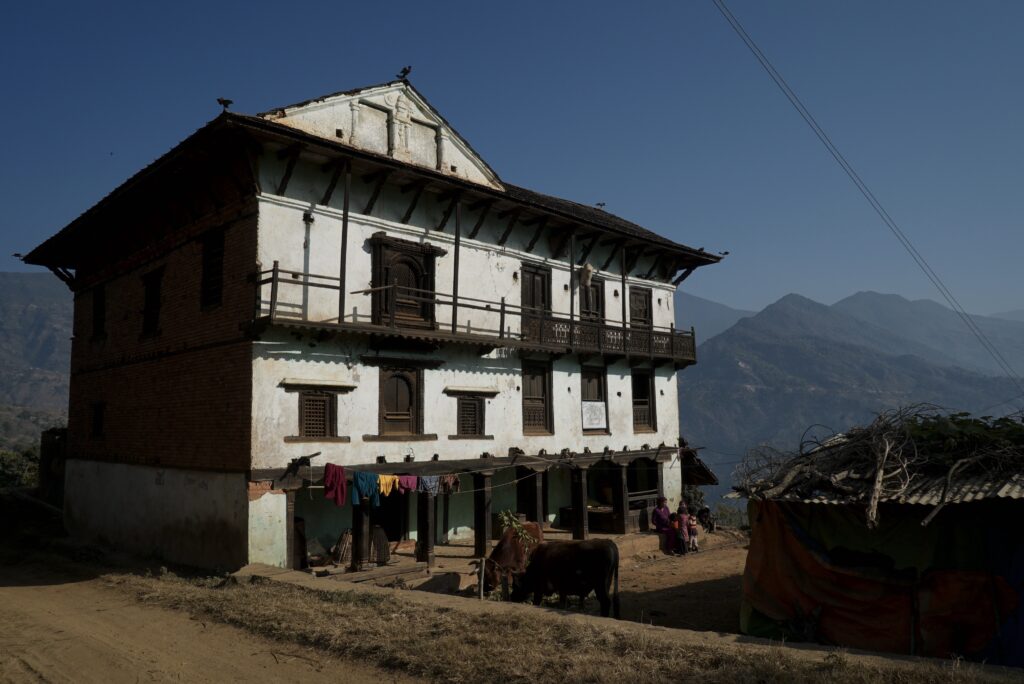 The old house in Nuwakot.

Every old village house has become precious after the earthquake in 2015, not only as a part of Nepal’s cultural heritage but also as carriers of local history, indeed for aesthetic reasons as well. The house above sits atop a hill in Nuwakot. It looks the same as when it was built more than a century ago. Once the home of the local village chief – the Pradhan Panchha – together with his wife and their seven children, it’s clay walls have listened not only to lively childrens’ chatter and the buzz of an always busy country kitchen but also to the more serious tone of long discussions about village matters and high-level politics. Visitors would come and go many times a day, to ask for help, to bring gossip from the next village or afar, or just to socialise on the shady porch outside. 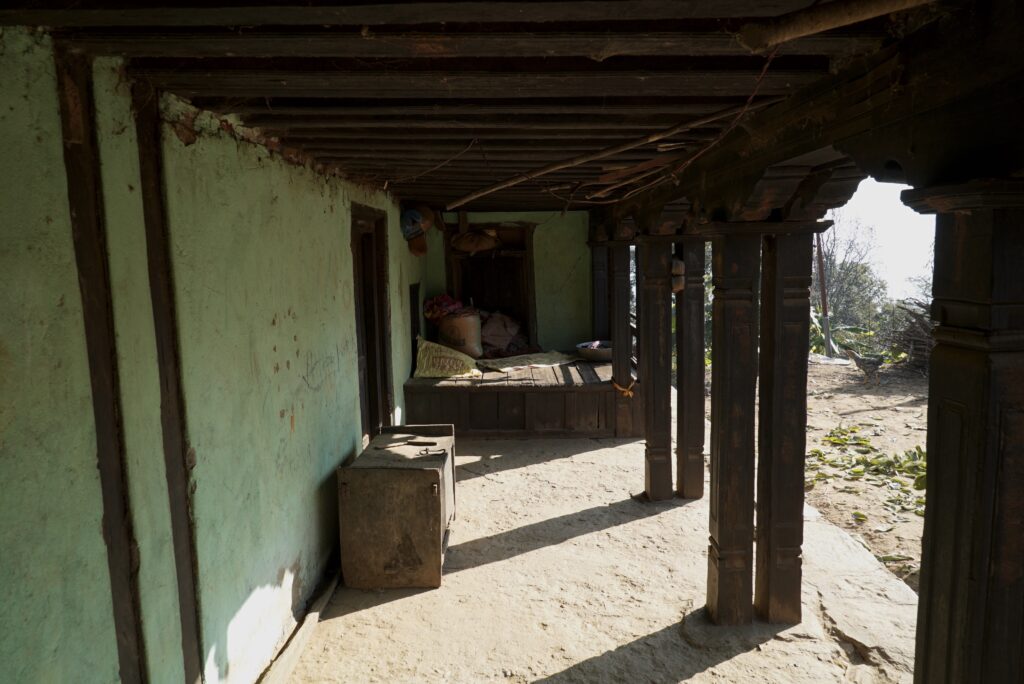 The shady porch so characteristic of old village houses like it.

In Nuwakot, a piece of history has been written into the still sturdy structures of this old building. It’s as though the house itself lets go of some of its secrets when the beautifully carved wooden pillars knack as the heavy winds of the monsoon hit, or as the summer heat makes the whole building expand, breathing in and out to the rhythm of nature up there on the hill. The thick mud and stone walls absorb the heat during the day and release it slowly at night which creates an indoor climate that no modern, concrete house can ever offer its inhabitants. It’s even as though the clay floor gives. Put a reed mat on top of it and a good night’s sleep will follow, sweetened by a slight breeze of fresh air gently circulating indoors. The roof tile maintains a comfortable temperature as well, which modern tin roofs, so common throughout the villages today, can never do. 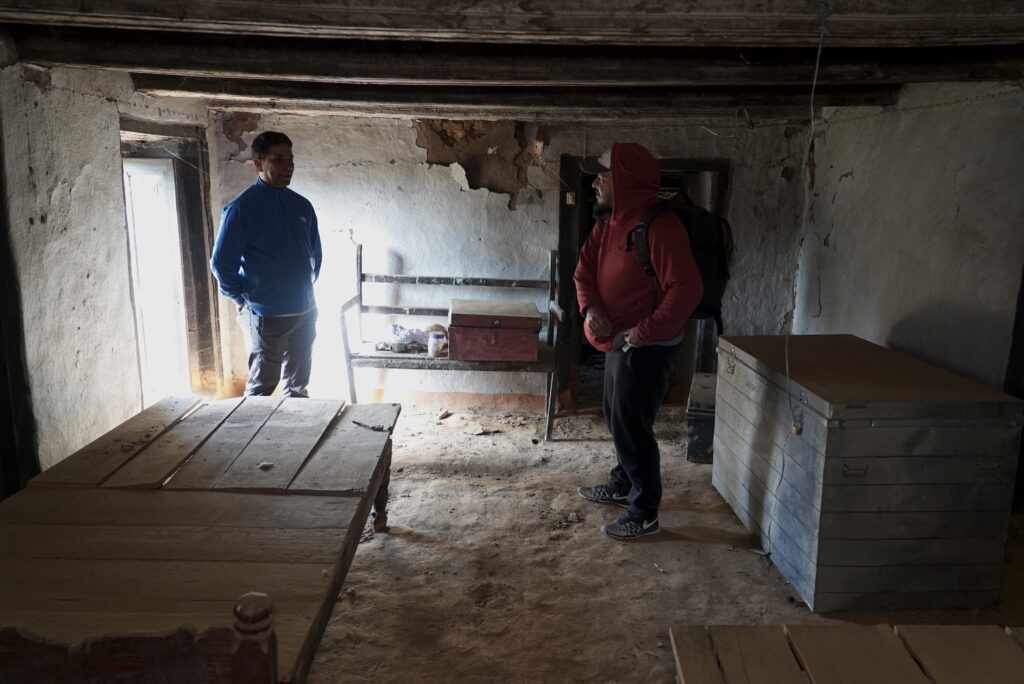 Stepping inside the old walls of mud and stone.

If one sits long enough outside this house in Nuwakot, listening to the sounds of the villages and letting the mind wander back in time, nostalgia may hit at any time. An old house once so full of life could fill any modern man with a longing back to the days when so much was different, when the materials were natural and the pace of life slower. The wood for the house was felled in a nearby forest. The mud and stones were collected on the slopes. Indeed, this old house in Nuwakot grew out of the local natural world. Its many details tell about life amongst those who once inhabited it. A safe built into the mud walls; several candle light stands integrated into the walls; and storage space for food items. Still today chicken roam about outside the house. A few cows and goats are kept in a traditional stable attached to it. It’s like a walk back in time to see a girl sitting next to a goat on the porch like children here so often did. 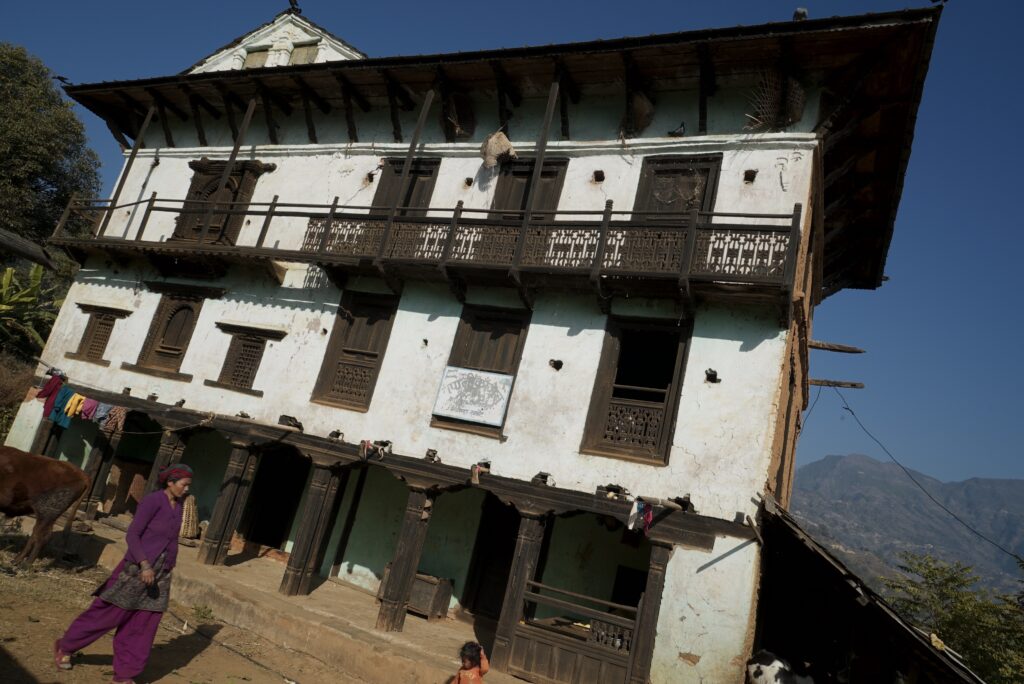 Beautiful old houses were turned into rubble in clouds of red and yellow dust when the earthquake struck. Few will ever be rebuilt. Different, modern building styles and materials are replacing the houses that once were for which there are both practical and economic reasons, to be sure. But the changing appearance of rural Nepal can hit the nostalgic observer hard all the same. It’s a loss of cultural heritage and local people’s identity, says the producer of an upcoming documentary about the loss of old architecture in quake-hit Tamang villages in Langtang. When longstanding houses suddenly are no more, it can feel as though part of the soul of a village has been lost. For someone who associates rural Nepal with the traditional building styles, seeing a house like the one in Nuwakot may engender joy mixed with a certain sadness at the loss of so many houses like it. Here’s to preserving this part of Nepal’s heritage.