Why go organic? A farmer in Tanahun explains 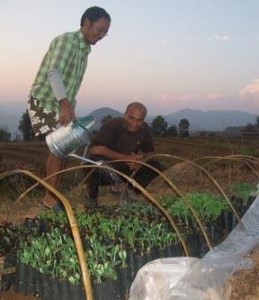 The growing use of pesticides in Nepal is increasingly provoking a counter reaction. Time and again, toxic levels of pesticides show up in vegetables on the markets in Kathmandu and major district towns. As a result, consumers are growing steadily more worried and conscious of what they eat, and more farmers are also becoming sceptical of commercial, chemical-based farming. So, what’s their counter-reaction? Well, still more have started to talk about “going organic”.

Why go organic: a farmer in Tanahun explains.

We just received a call from a farmer down in Tanahun, Mahendra Shrestha, who is not only talking about it. He and his wife have now taken action. They are running a small organic farm – the Holy Green Organic Farm – and other farmers in their village are also attracted to the idea. Yes, great profits can be made from chemical-based farming in short time, Mahendra agrees. But in the long term, organic farming is better. Watch the episode of “Local Voices” opposite to hear him explain why that is: it’s a small farmer’s views on a heated issue in Nepal today.