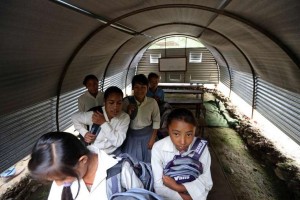 Post-quake, many students are left to study in tin shelters or under tarpaulins

Will this year’s SLC students have a better chance than, say, last year’s class? Well, it was always hard to get through the “Iron Gate”: 10th graders have had to struggle a lot – the pass rate is barely 35 percent – and this year it’s not likely to get better. In the districts hardest hit by the earthquake, thousands of schools still lie in ruins – many students are left to study in tin shelters or under tarpaulins – and in the Terai, bandhs and unrest over the constitution have locked down many schools for months on end! 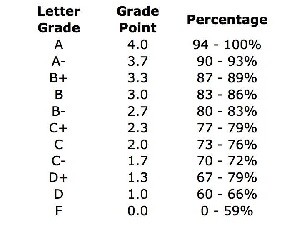 The grading system is changing to letters, and you can’t fail like before, but much else is worse

SLC students sitting for examinations in April, to be sure, do have one thing to be optimistic about. They will now be allowed to graduate no matter their SLC examination results! The government has replaced the original pass-or-fail system with a grading system inspired by western models. Indeed, western youth from various countries will only be too familiar with it: it’s the A+ over B, C, D down to E-system. Even if you get an E, you’ll still get your certificate and you’ll no longer have to repeat 10th grade! 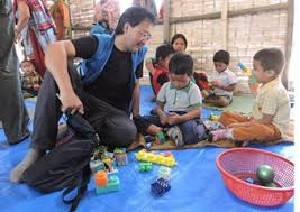 Seriously concerned about the future of millions of children: UNICEF representative Hozumi

But it’s one thing to pass, quite another to get a good mark under the current conditions. Says Tomoo Hozumi, UNICEF representative to Nepal, on the impact of the earthquake and the ongoing political unrest: “We are seriously concerned that the future of millions of children in Nepal is being put in jeopardy with the current situation in the country.” In the earthquake affected districts, thousands of schools – or 50,000 classrooms – collapsed and many students have to study under harsh conditions! 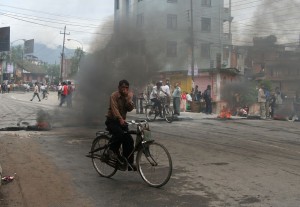 Schools in many districts have barely stayed open for half the time: getting passed another road block

In August, conflict and violent clashes broke out over the constitution not least in Terai, and as a result over the last six months or so schools in those districts barely stayed open for half the time! In Mahottari, for example, students stayed home for 100 days in a row and in Parsa the number was 117 days, out of an academic year supposed to count 220 days! When school finally opened, it was in several districts often just for a few hours a day. Indeed, fresh bandhs and unrest frequently interrupt school still now. 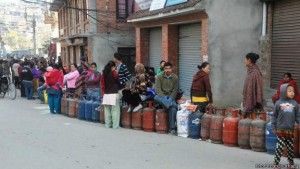 War-like shortage of fuel and basic goods due to the blockade are hitting students hard too: lining up for gas cylinders

The earthquake and war-like shortages under the blockade have hit students in other ways too. How can you do homework efficiently in a tin shelter that’s boiling hot in summer and wet and freezing in winter, or afford tuition fees and books when prices are soaring on anything from cooking gas to essential foods. How can you get safely to school when protesters are blocking roads and traffic?! Indeed, the situation does not do much to lower teacher absenteeism or improve availability of school textbooks, either!

It’s school holidays in whole of January which in this situation means only one thing: even further loss of precious study time. How can 10th graders from the many affected districts get an “A” or even “B” – or whatever the new modern grades offer – when large parts of the curriculum was never taught due to loss of school hours?! Indeed, looking back on 2015 – perhaps one of the worst years in Nepal at least since the height of the Maoist conflict – one has to be be hopeful but it’s hard to be optimistic. 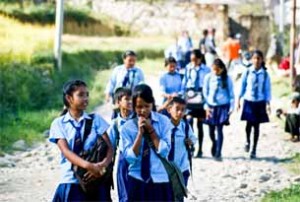 Will it get better next year? Textbook shortage – just to mention one issue – is set to continue in 2016/17

To top it off, here’s the latest from those responsible for publishing school textbooks. SLC students – indeed, students of all grades – have faced massive delays in school textbook distribution also this year. Several months of waiting time for getting textbooks is common! In fact, it was just announced that also next year millions of textbooks will be delayed, so scores of students won’t get their books in time. In sum, those SLC students who do make it to the exam in April will have been through a lot to get there.

PS:
Is school reconstruction going to start anytime soon? Well, INGOs have built some schools, but the government’s National Reconstruction Authority (NRA) only began operations just before new year – a six months delay! It remains to be seen how quickly the NRA will start spending the USD 4,4 billion available to it, and how much will be spend on school buildings. As for the ongoing political crisis – disrupting all aspects of life not least in the Terai – when this crisis will end and how soon school will get back to normal is, it seems, anybody’s guess.

Reply Retweet Favorite
For decades it’s been the same: local parties use community schools as a basis of political patronage and control https://t.co/INLtd3QaJ3