Seed imports – and how farmers lost their “seed security” 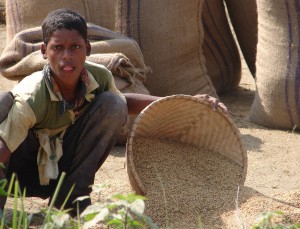 Fifteen years ago, a young Nepalese student of agriculture – N. P. Timsina – went to districts in the Mountains, Hills and Terai to study seed security. His motivation? Well, seed security, Timsina wrote back then, is where all food security begins! For centuries, local farmers in the districts that Timsina visited maintained their own seed supply. Cucumber, beans, cawliflower, as well as rice, maize and all other crops were cultivated, not with seeds bought on the market but with local, home-grown seeds. That meant a high degree of seed self-sufficiency. But in the late 1990s this whole system was changing. 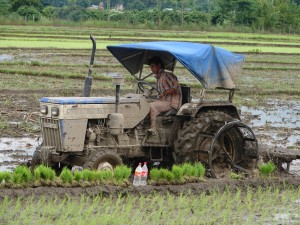 The “green revolution” had brought imported seeds, and chemical fertilizers and pesticides, into agricultural communities, and this transformation was only accelerating. Indeed, many poor farmers couldn’t afford these modern inputs. But even farmers with just a bit of money to spend realised that buying seeds at the shop was a lot easier and quicker than having to cultivate and preserve seeds at home. Hybrid seeds would also yield better in some years. Moreover, donors made “seed kits” available to farmers for free, and so farmers started to abandon their local seeds for imported varieties. 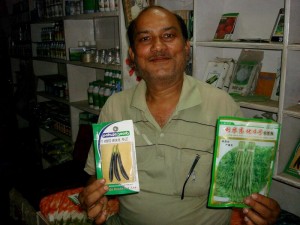 “Initially it was easier to buy seeds at the market”

Here’s a woman farmer telling Timsina about this trend and about the implications for seed security after shifting to imported seeds: “We used to keep seeds of all crops and vegetables for domestic use at home. We used to make small packs, keeping some of them above the kitchen and in small clay or tin containers. We had our own seeds available at the time of sowing and the crops were delicious to eat. But now the local seed saving practices are disappearing. We are almost entirely dependent on the market. Initially it seemed easier to bring seeds from the market, but we are slowly realising that if these seeds become unavailable one day, we can’t grow any vegetables at all.” 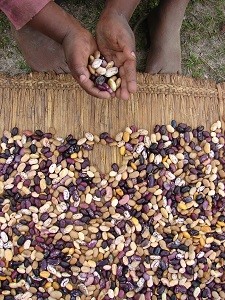 Drying and storing seeds in the sun: beans

Traditional farming practices in the districts visited by Timsina were about crop rotation and inter-cropping as well as inherited ways of drying and storing seeds. From Dolakha in the Mountains to Kaski in the Hills and Chitwan in the Terai, it was common to keep seeds after every harvest for re-sowing. Farmers used to have a rich variety of seeds in their storage in order to better adjust to variation in soil conditions, pest types and local weather. But all of that was changing. A local farmer gave Timsina an example: “We used to keep four-five varieties of rice seeds in our home for the next season to grow. But now all villagers grow only two varieties. All other varieties have disappeared.”

Local seeds were known to be highly resistant to crop diseases and adapted to the soil and water conditions in the respective land areas. However, not only easy access for those who had money but also higher yields in some years motivated many farmers to shift from local seeds to imported – typically hybrid seed – varieties.

What’s the situation today, around fifteen years after Timsina’s study? Well, Timsina’s observations stand as testimony to the early stages in the commercialisation of agriculture in Nepal – and to a loss of local seed varieties and seed management systems which has only accelerated. Ask among farmers and more will say now than back then, like one farmer recently did, that: “Our local seeds are about to disappear. If for some reason these [imported] hybrid seeds do not come, we would be in a situation of emergency.” Without local seeds to fall back on, farmers have become more dependent on imported seeds – and in case of crop failure, a farmer who needs income to buy fresh seeds can face economic ruin. 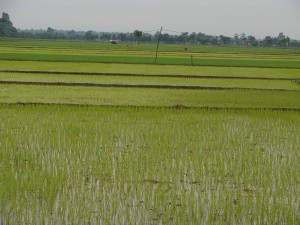 It’s also worrying researchers looking at seed security in Nepal as well as in numerous other countries that mono-cropping and commercialisation is dramatically reducing not only seed security but also seed diversity! The genetic pool of seed material is getting steadily smaller as imported, typically hybrid seeds continue to drive out local seeds cultivated over centuries to yield under local conditions. The adaptability to changes in anything from pest types to weather changes is decreasing as variation in the seed-pool is much lower than in the past. 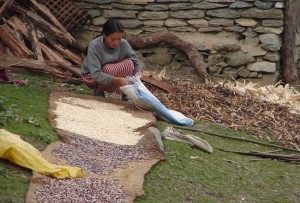 There is still hope, though, for inherited, local seeds. The answer of donors like USAID to the whole issue of food security in Nepal is above all “more hybrid seeds” – most sold by corporate market players – as well as chemical input. But meanwhile, poor small-scale farmers not least in more remote parts of the country, who cannot afford to buy and use imported seeds, preserve much of what’s left of Nepal’s local seeds simply because they keep using them. In fact, also globally it’s poor small-scale farmers who keep local seeds and traditional seed management systems alive. Writes a Penn State geographer: “As much as 75 percent of global seed diversity in staple food crops is held and actively used by a wide range of small farmholders, with the rest in gene banks.” 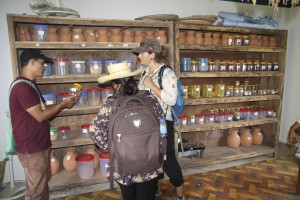 Is there a “gene bank” for local seeds in Nepal? Well, like in many other countries today there is a number of them! They are local facilities known as “community seed banks”, rather than a few centralised vaults, but they do exist. Many of these community seed banks are maintained by local people, several with INGO assistance, and the last count turned up a total of 115 seed banks across the country. In other words, there still are local seeds to fall back on, not only thanks to poor, small-scale farmers but also to these more organised seed storage facilities.

What, then, will promote seed security – and ultimately food security – in Nepal the most: inherited, local varieties nurtured in the community – or imported, hybrid seeds? Well, fifteen years ago Timsina had no doubt about the best way ahead in the long term: to preserve, use and develop local seeds. But the right answer is of course only for time to reveal.