Home Culture and Change Roads and nostalgia – a memory from Jomsom

Roads and nostalgia – a memory from Jomsom 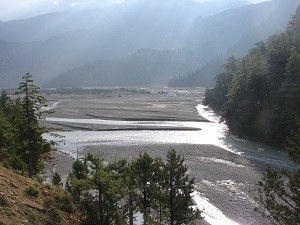 Longing for the pristine.

Imagine being on a hike along a seemingly pristine mountain trail, feeling light years away from the noise and smog of the city. Why did you go there? Well, not because you had to reach the market in town or the healthpost to see the doctor or buy medicine. No, you went there longing precisely for the pristine and isolated, hoping to connect with the silence of the mountains and feeling back in time to how Nepal once was. Then, unforgivingly, the roar of a truck breaks the silence and you are left in a cloud of warm dust and fumes as the heavy vehicle climbs on to the next bend. So much for pristine and isolated! Well, it’s long-since a fact: the visitor who longs for the untouched now has to venture still deeper into the mountains to find it. How deep? For one, even going past Jomsom up in Mustang is no longer enough. Trucks are going there too!

Is that great: the expansion of the road network into the remote parts of local Nepal? Well, the government’s millenium goals spell it out quite clearly: the country needs roads in order to develop – and lots of roads too. Without a doubt, it’s only for the better from a developmental point of view that substantial aid money is going into road construction and maintenance. Many would even say that the allocated and spent money is still not enough. Indeed, roads are essential for development as we know it. Just consider the youth looking for jobs, the local farmer trying to find a market for his produce, not to mention the access and exposure to the outside that a road can offer. Roads seem to hold an answer to all of it! Or put it this way. Live in a country with plenty of paved roads and you forget how difficult things are without them; stay in a country left with gravel roads and potholes and you are quickly reminded. In other words, roads are truly great – in a lot of ways!

So why be nostalgic about it? Well, in our case it was at watching the video shown opposite here. Play it and you might feel it too. It was taken some years back on a hike up to Jomsom when the river bed was dry. Back then we saw just one tractor – that was all! Otherwise, this area still belonged to the traditional mule caravans. Who knows how long these caravans have beeen bringing up goods from lower Mustang to the towns and villages of the highlands and back? Some say a thousand years or more! Either way, crossing path and meeting with the mule drivers really was like going back in time. Listen to the sound-track for a moment: the mule bells, the herders urging their pack animals along, the distant silence of the Himalayas. Better than the roar of a truck, isn’t it? Well, better in what sense, you might ask back. That is indeed a justified question. A bit of noise pollution and gas fumes may be a small price to pay for the advantages that a road can offer! 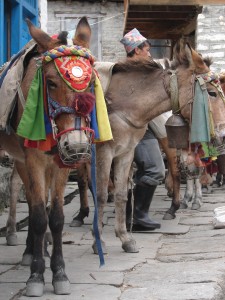 Farewell to the mules

True that roads are not always good for everybody. But many will say that in the long run they eventually are. Look at the mule drivers in the video. They have not all welcomed the road. Many of them have realised that their trade is going to die out with their generation, and some mule owners have sold their animals already or decided not to restock. Indeed, tourists might still want a ride to feel the ambience of the old mule trails. But for that, a few ornamentated animals will suffice while the old heards have to go. Meanwhile, there are some who fear a drop in tourism too: hikers who came for the pristine and untouched might go elsewhere – deeper and farther into the mountain reaches. But then again, flip the coin and lots of benefits seem to await! The end of the mule caravans, yes, but the possible beginning of so much more, in the long term: employment on the trucks, which is also less strenuous than driving mules up the mountain. Or think of the easier access to markets near Tibet and south in Pokhara and beyond – in fact, the road is already said to promote business. Easier access to the outside, and to modern things like the Internet and mobile networks, also lie ahead. That is all positive! 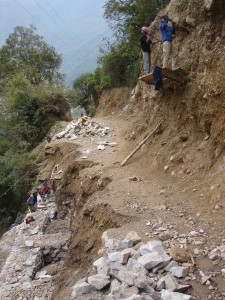 Digging through – roadwork in progress

In any case, road construction began a long time ago. So why stop the process now, even though the dozers are indeed entering outlying areas like ever in the past. After all, there are already many other places where the same transformation is going on – and where it seems just as irreversible. Take the Sindhuli highway, now almost complete, which is bending its way through hilly forests east of Kathmandu down to the Terai – those were pristine and isolated tracts of land less than a decade ago. Or think of the perhaps thousands of village roads dug out and expanded not least since the early 1990s, opening up hitherto remote communities. Isolated villages are steadily fewer and far in between – and many would suggest we applaud rather than regret it. Indeed, we once met a group of dairy farmers at the end of one village road who were not in doubt. Their road was a great asset! Although a mere gravel track, the milk collector could now reach their village in his pickup every morning. Certainly, a local porter was less happy about the road, since he had lost his trade to it. But still, his kids could now reach school in shorter time too. So in the long term: good for everybody!

Nostalgia is in short misplaced if what you want is development. We should rejoice in the roads – these “arteries of development” – not decry or reject them, as more and more roads penetrate farther and deeper into the pristine and isolated parts of local Nepal. Speak against roads and you are actually questioning the blessings of development itself! Were roads not essential to economic progress in the western countries too – to trade, production, the movement of labour, and more? Sure they were! It is also true, though, and a bit ironic perhaps, that westerners do travel all the way to the mountains of Nepal in part to get away from the busy roads. Why do they come? Well, perhaps there is something about the pristine and isolated mountain trail, or the traditional village for that matter, where all you hear are the chimes from the temple, the distant bark of a dog, and the chatter from the teashop. Indeed, roads connect us in crucial ways. But do they also detach us, maybe from something equally human – not the urge for progress and wealth but the feeling of calm and harmony? I guess the tourists who seek the mountain trails might say a thing like that.

Nostalgia about the roads is nevertheless a luxury, and one that few can afford, save perhaps the western tourists who were long-since accustomed to life without material lackings. We must appreciate the advantages and opportunities that roads do offer to a “developing country”. The loss of the pristine and the isolated would seem like a more than reasonable trade-off. Why, then, did watching the video from Jomsom, which will soon be a mere document of how things once were, trigger this brief moment of longing – of regretting the on-march of the roads? Well, pausing on a memory can of course make you a bit emotional. In that state of mind, you might indeed even happen to ask: do we actually lose something as the roar of the trucks and motorbikes grow ever loader? A luxury question indeed, if what we want and need is development. So: let’s drive ahead!

For a factual article about the impact of the road in Jomsom towards Lo Montang, also check out the article Monsoon in the rainshadow by Kunda Dixit.