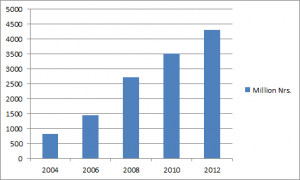 Remittances are more and more important to Nepal’s economy 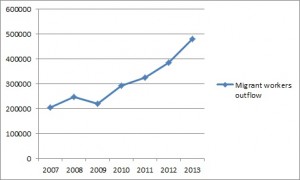 It’s no surprise that remittances make up such a large share of Nepal’s GDP: currently, at least 2.2 million Nepalis, the bulk of them young men in their twenties, work abroad – and that’s not even counting all those working abroad illegally. Officially, 2,000 more Nepalis are applying for work in places like Qatar and Malaysia every day. The reason, of course, is that few jobs are available at home. It’s even become difficult to earn enough as a farmer. Many problems – from rising costs to failing monsoon rains – have hit farmers hard, making even more youth migrate. 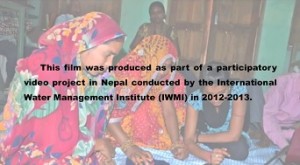 Rarely can locals tell about migration issues on video

The impact of migration in Nepalese society is immense, but not only from an economic point of view. It has big social consequences as well. Some of the social implications are mentioned in academic papers and daily news articles. Indeed, it has become increasingly well-known that migration work comes at a price! But rarely is the microphone, let alone a video camera, handed out to local people in the villages to let them tell about it. Floriane Clement, a social scientist with International Water Management Institute, however, has done just that. The result of her project? Some worrying, local testimony. 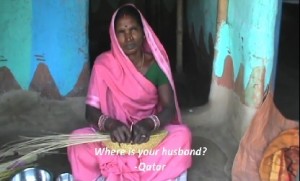 In Florianes videos – recorded in the Janakpur area by locals themselves – men and women tell about the difficulties they face in the context of migration. In some villages in Nepal, more than half of the men have migrated, leaving wives and children behind often for two years or more. Many families are in debt from borrowing large sums of money paid to the manpower company who provided the job – and many are unable to pay back the loan. On top of that, who is going to work on the land when the husband is away, and what if he’s not paid, which also happens? 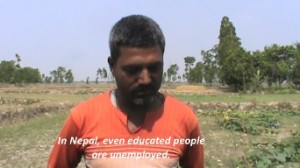 Men’s experience: migration the only way in face of unemployment

Watch Florianes videos below – they illustrate how difficult migration is from a villager’s point of view. Indeed, if there was no work abroad, “men would have started eating men”, as one villager explains. Or in short, migration works like a “vent”: it lets out steam from the frustration of young men who can’t find jobs in a country with over 40 percent unemployment! But migration is also leaving many families and communities disrupted. Once the core of Nepalese society, the “family” and the “village” are being torn by the forces of migration. Florianes videos offer a chance to hear about this first hand!

For more of Floriane Clement’s videos – recorded by locals themselves – visit the project website here. The project was funded by IWMI and the CGIAR programme on Climate Change Agriculture and Food Security (CCAFS).