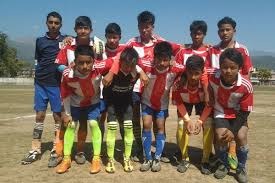 Money in football? Young players ready for a match

Football is indeed loath with money in many countries and can be the road to prosperity for a young person. But is football a source of income and profit also in Nepal? To be sure, money is involved. As a case in point, the next winner of the National League tournament will be awarded one crores rupees! But check out another fact. Just now, Far Western Football Club (Kailali) bought sixteen Nepal U17 players for the tournament to maximise their chance of winning. Total price tag: 1.3 million rupees. It is unknown whether the players got a share in the money – but money sure plays a role!

NB: All Nepal Football Association hold tenders on U17 players, as well as players from Army teams, every year. Local clubs submit bids and the highest offer wins. This year, Rupandehi gave up in the tender and Kailali scored the sixteen U17 players, only few weeks before the tournament kicks off!

By the way: football is indeed a major field of corruption in Nepal. Here’s more…

The dark side of new roads in Doti https://t.co/s5g8dofODN via @kathmandupost