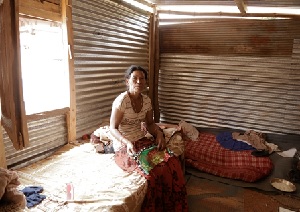 It’s been three years since the reconstruction started: woman inside her tin shack, summer 2015.

It’s been three years since the then government promised a speedy reconstruction process after the April 2015 earthquake. But it’s no secret that the pace of reconstruction has dropped to snail speed at times. What about now? Well, the National Reconstruction Authority (NRA) who recently completed yet a survey in the affected districts has just laid out the figures:

But how many of the eligible households had actually built a house by June 2018, three years after reconstruction started? 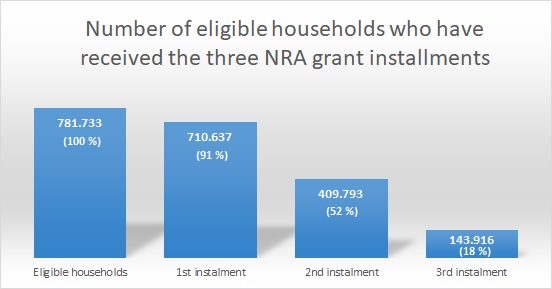 Still a long way until all eligible households have received the NRA grant in full.

The NRA reconstruction grant has so far resulted in the completion of 166,248 houses – around 55,000 a year. That’s the total! Close to 410,000 houses are undergoing some form of construction but how far they are to completion, or whether the houses are liveable, is not clear. 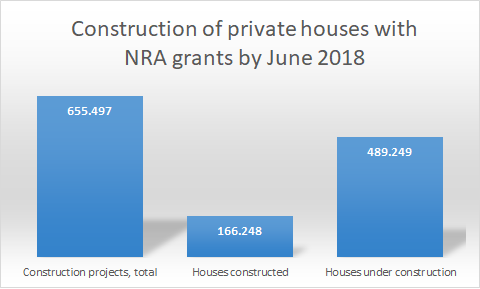 If one household accounts for one house, then even out of all eligible households who have achieved an NRA grant agreement only 23 percent have built a house. 9 percent have not even started yet. The rest – 68 percent – may have built part of the house but not yet completed it. 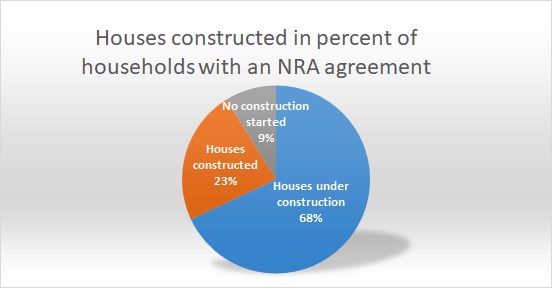 Only 23 percent of the eligible households with an NRA agreement had completed a house by June 2018. Source: NRA Reconstruction Progress Report, 18 June 2018.

Why have more of the eligible households not built a house – in a period of three years? Indeed, the obstacles that have slowed down the reconstruction process exist at different levels, from Kathmandu to the individual household, and are many, but here are some major ones:

– Complex registration and application procedures. To apply for the grant, households need to produce a number of formal documents which are notoriously time-consuming to obtain; to get the installments, they need a bank account where banks are often far away; and engineers whose inspection is required in order to get the next installment are notoriously late.

– Political interference. The NRA itself but also registration of eligible households and grant distribution have been delayed by political bickering and manipulation.

– Vast household surveys. Several vast household surveys had to be made to determine and re-check the number and identity of eligible households. Complaints about political manipulation as well as unjustified exclusion from the NRA grant programme required major follow-up surveys.

– Lack of funds at the NRA. The international donor community, not least the Indian government, pledged billions of rupees in reconstruction aid but only some of these funds have actually reached the NRA bank account.

It’s also well-known that even 300,000 rs. – the total reconstruction grant, equivalent to 2,700 USD – is not a lot for building a house. The prices of building materials and masons keep rising. In Kavre district, one of the worst hit districts, building a new house easily costs 5-600,000 rs. Lack of money is a major reason why many households do not yet have a house! 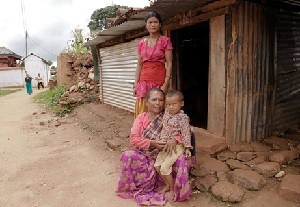 Many households still live in tin shacks: will the reconstruction process speed up?

Is the reconstruction process about to speed up? Well, the NRA just completed yet a survey to validate the eligibility of households in 57 local units. It took six months, involved 332 engineers and covered 130,000 households. Perhaps this will be the last one. With the number and identity of eligible households in place, at least this hurdle might no-longer cause delays.

But the NRA’s difficulties are only one thing. They pale in comparison to those of the affected households. Exposed to the elements when the shelter roof leaks or the sun heats up the tin shack, the practical difficulties are legion. Some take loans and go into debt to rebuild. Many elderly and women-headed households are faced with especially severe challenges.

Our thoughts go out to the still thousands of families who have to make it through a third monsoon in a temporary shelter. Hopefully, the reconstruction process will speed up once the rainy season is over and house construction can again start up. We’ll return with another update from the NRA Reconstruction Progress Report as soon as the next report is out!

Here are some recent quotes illustrating the complexity of the reconstruction process:

“If people are going further into debt as a result of the earthquake, it poses longer-term questions about their life chances — whether their kids will be able to pursue and get a good education, and what that really meant for the families’ strategies.” Daniel Coyle, country director of People in Need, on consequences of a growing number of households taking loans to reconstruct their houses. Source.

“At a time when the male-headed households are unable to rebuild houses on time, the situation of single women, who have very limited or no support at all in rebuilding, is even worse.” Sumeera Shrestha, executive director at Women for Human Rights, Kathmandu. Source.

“Our only son is just 19. It’s not time for him to go abroad yet [as migrant worker, to send back money]. And so where will the money come from? I don’t sleep well at night, thinking ‘How will I pay my loan? How will I finish my house?'” Shyalmo Tamang, 62, Baaskharka village. Source.

Reply Retweet Favorite
The dark side of new roads in Doti https://t.co/s5g8dofODN via @kathmandupost