Extreme sports growing in the Himalayas

Extreme E is the latest offshoot on an expanding tree of extreme sports that has reached the Himalayas. This international electrical SUV car race is set in extreme terrains around the world where the effects of climate change are felt at the same time. The Extreme E motorsport venture just selected Mustang district as the location for its racing challenge in mountains! 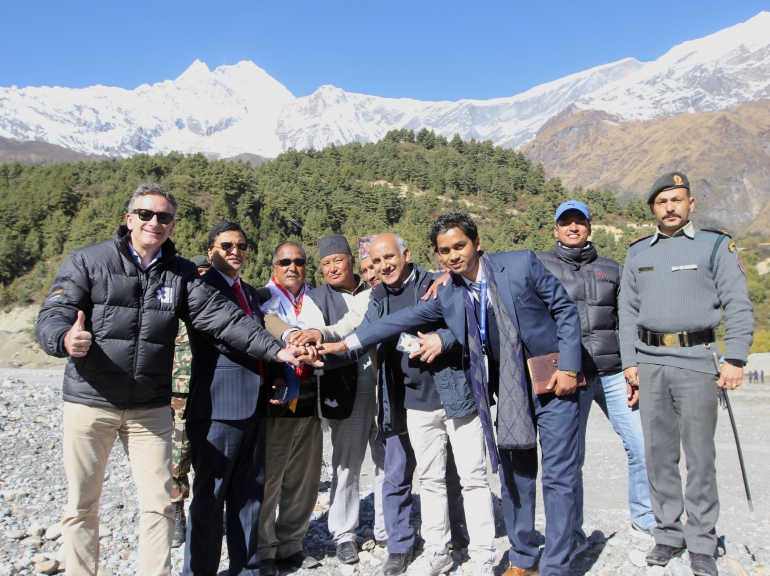 At the announcement of the first ever motorcar race in the Himalayas. Photo: Extreme-E.com

Alejandro Agag, CEO of Extreme E which attracts professional drivers from around the world, explained at the announcement of the event in Kali Ghandaki on Monday why Mustang is the ideal location. Extreme E has races in the Amazon rainforest, on the glacier ice of Greenland and in the desert of Saudi Arabia, but here’s why Mustang is perfect for the mountain venue:

“Today we are here in the heart of the Himalayas, in the Mustang Region, to announce that Extreme E will be the first race to ever be staged in the highest mountain range in the world, the Himalayas. The Himalayan region is a spectacular, unique environment with incredible terrain for off-road racing, which will provide the sternest of tests to the world’s leading drivers, engineers and teams… It is an incredible place.” 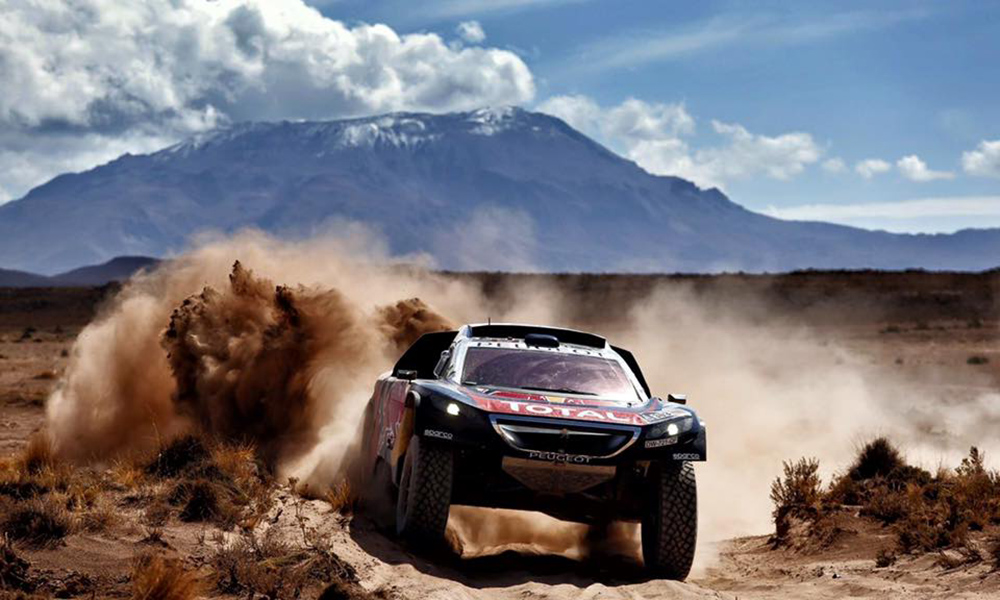 The Himalayas in the Mustang region is a spectacular, unique environment with incredible terrain for off-road racing: an Extreme E car.

Minister of Tourism, Yogesh Battharai, was equally excited. He added that Extreme E is also likely to attract more extreme sports tourists as well as more tourists to Nepal in general:

“We are extremely excited to welcome Extreme E to Nepal. The country has a unique natural and cultural diversity and harbours a number of instantly recognisable world landmarks such as Mount Everest – the tallest peak on Earth – and Lumbini – the birthplace of Buddha. We are confident that hosting this international series will serve to further our global appeal…”

Meanwhile, Mustang is teaming with other extreme sports plans and activities, one of which is trail running. Next year in April, running enthusiasts will hit the Mustang Trail Race for the seventh time: a 170 km long, high-altitude run in 12 days which goes through extreme terrain and pearls of unique villages. This year almost fifty runners hit the trail. The event is not just about running and winning but also exploring the culture and natural wonders of Mustang! 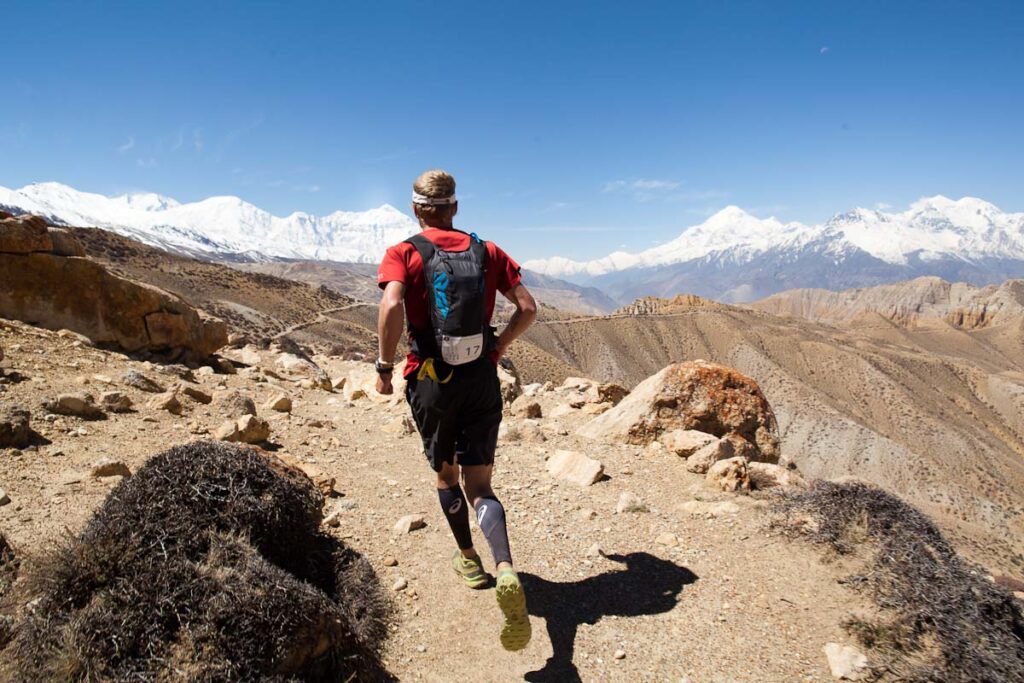 The Mustang Trail Race has both national and international participants and is as extreme as village life in Mustang, at altitudes between 2,900 m. and 4,300 m.. A statement by a previous participant illustrates why this race continues to attract still more trail runners. It’s physically strenuous to run in such an extreme environment but at the same time utterly spectacular:

“This race is a once in a lifetime opportunity. You will experience adventure in an ecosystem unlike anywhere else on the planet — through high red desert, dramatic canyons, villages of twelve households, with Annapurna and Dhaulagiri looming in the background. You will be challenged by the running and the altitude and nurtured by the views and the wonderful people with whom you’re experiencing these timeless communities. An absolute must do.”

Trail running is a growing sport in Nepal and attracting more participants every year. Just see the trail runner’s website here! But so is mountain biking. One major race is Yak Attack, also set in Mustang. It’s in fact a high-profile event on the Mountain Biking Worldwide calendar as well, and for good reason. It’s the highest mountain bike race in the world, climbing to a dizzying altitude of 5,416 m. on a 280 km. long trail, and some of it goes across ice and snow! 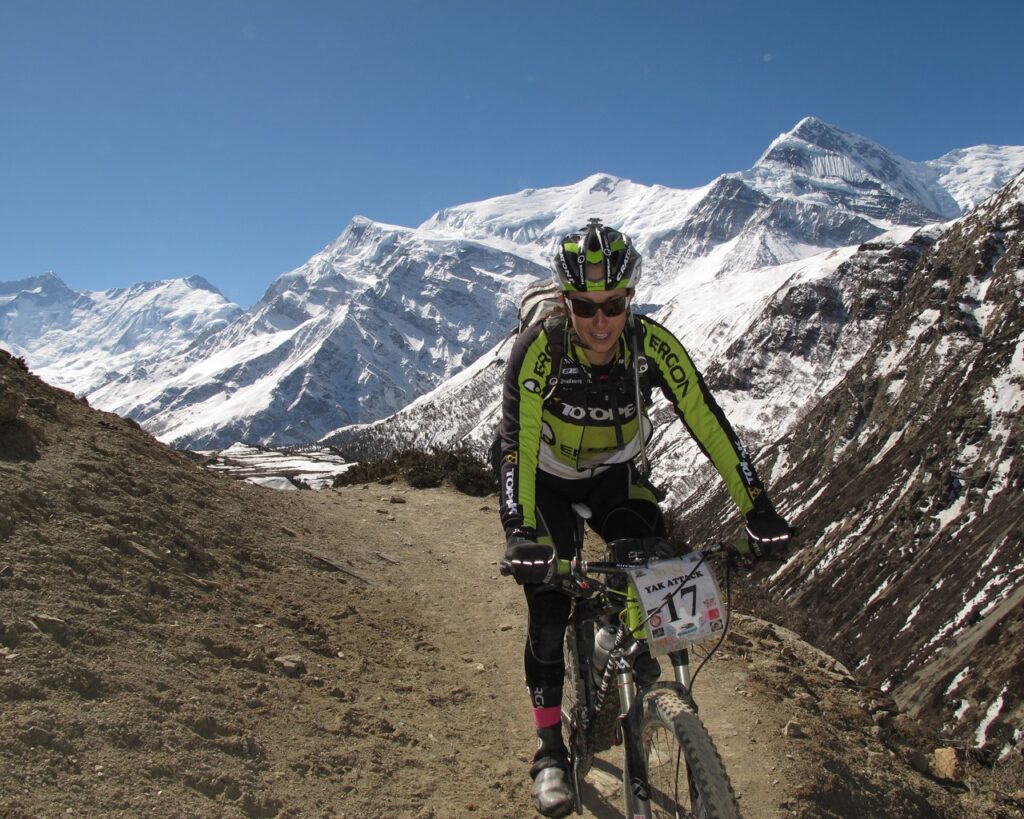 The highest mountain bike race in the world: on the Yak Attack trail.

Yak Attack 2019 is on right now this November. Its first stage was completed on Monday with participants from nine different countries altogether. How long Yak Attack can keep the title for itself as highest mountain bike race in the world is in question, though, as the Yeti Bike Race – an 11 days tour on the Annapurna circuit – launches next September and goes just as high!

But not all extreme sport is competitive. Indeed, it can be enjoyed and organised in a more leisurely way too! Mountainbiking-worldwide.com, for instance, organizes still extreme mountain bike holiday tours in the Annapurna and Mustang region; and those who like an engine under the saddle can join a guided motorcycle journey into the Himalayas. Motocross into Upper Mustang is offered by several tour operators – a 16 day tour is one option, a 14-days tour another – and off-road motorcyclists love the ride. As one British biker explains:

“It’s an experience where the riding is challenging, the altitude physical and the scenery is unlike anything else I’ve had the joy of experiencing. It’s a motorcycle adventure paradise.” 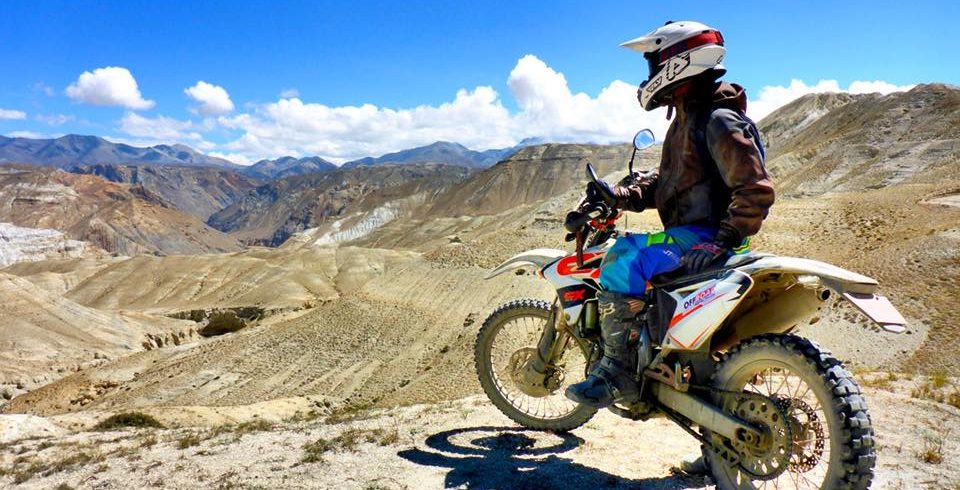 A motorcycle adventure paradise: an engine under the saddle in Upper Mustang.

Mountaineering is scaling new heights of popularity as well. Just this fall, international climbers went to the summit of five new peaks never conquered before! Mira Acharya, an official at the Mountaineering Division of the Department of Tourism (DoT), recently announced that the peaks of Panpoche I (6620m), Panpoche II (6504m), Hunku Chuli (6833m), Hongu (6764m) and Linku Chuli (6659m) have now been successfully scaled. This is significant, Acharya added:

“The successful summits of the five virgin peaks have spread a positive message to the world. This will play a significant role in the development of the country’s mountaineering sector.” 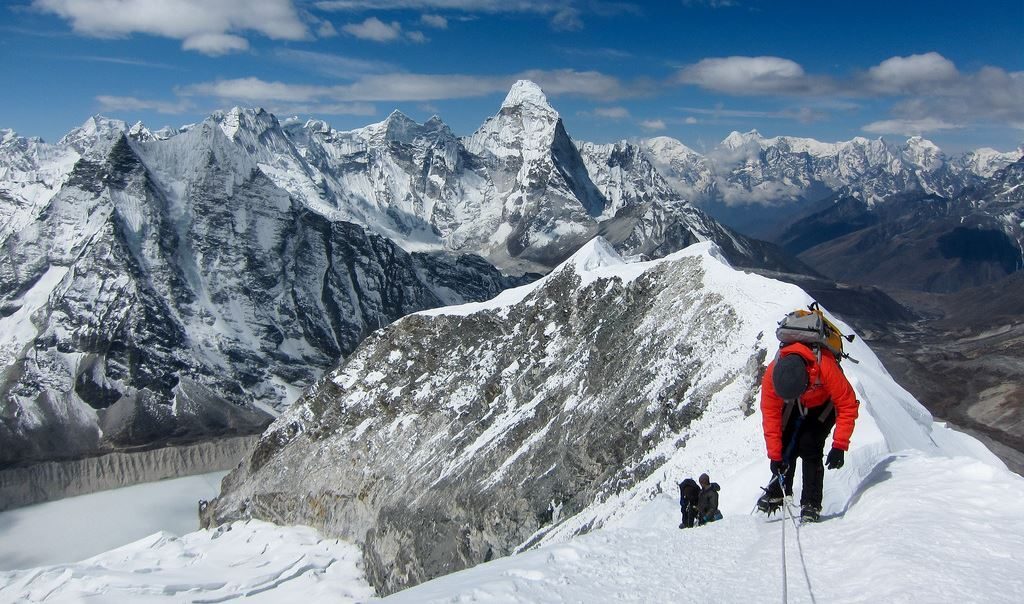 Mountaineering is scaling new heights of popularity as well.

Extreme sports in Nepal includes many more activities and events than mentioned above. Look at venues like Manaslu Trail Race, the Racemandu motocross event, not to mention the Everest Marathon, and it’s clear that extreme sports have found an attractive and growing playground in Nepal. Add to that the First Nepal Paragliding Accuracy World Cup in 2018 in Syangja, and world-class white water kayaking in numerous rivers with more and more races every year, and the potential of extreme sports as a growing tourism sector stands out.

Another offshoot on the expanding tree of extreme sports in the Himalayas is the Cassanga Callenge in Annapurna, a triathlon of trail running, mountain biking and white water kayaking that started in October this year to honour the memory of Cassandra Elise Emary, “an inspirational young woman who was dedicated to improving the lives of women in Nepal through outdoor adventure pursuits and eco tourism”. It’s the first event of its kind and it’s giving birth to an adventure race that may attract even more to the extreme sports arena. 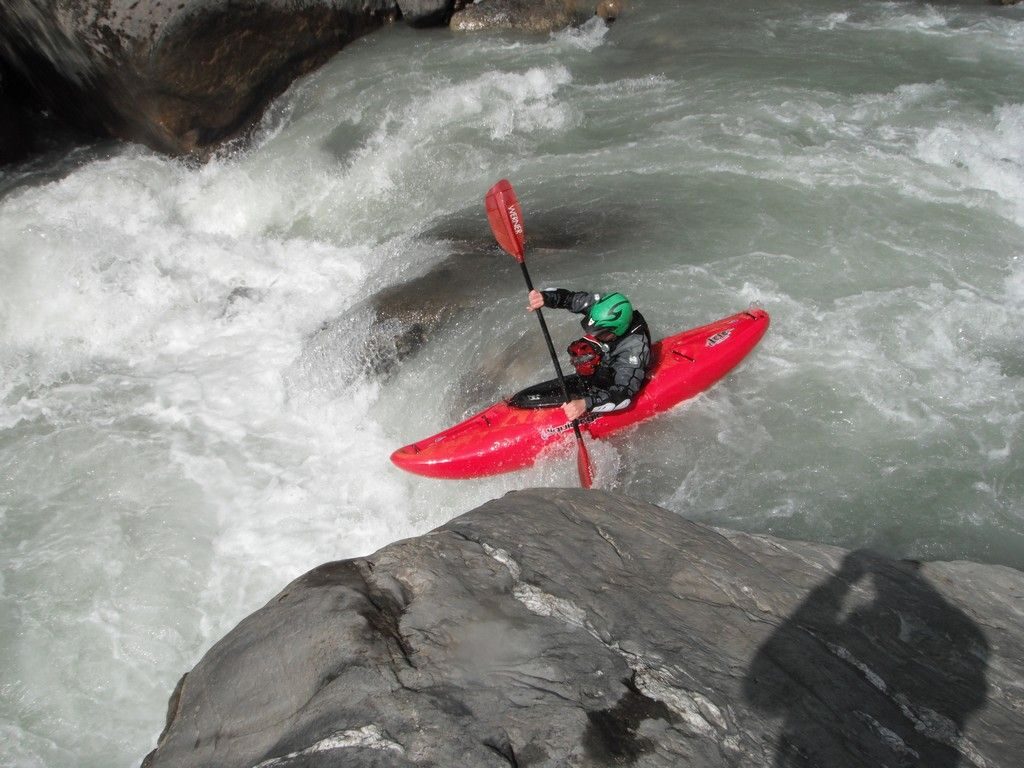 Some of the world’s best white water kayaking: adrenalin rush on the Modi river in Annapurna.

Extreme sports are growing in Nepal not least on the trails, mountain peaks and rivers of the Himalayas, and so is the interest of extreme sports athletes from around the world. With events like Extreme E reaching Nepal, there might be more venues to come which could be of benefit to the tourism industry locally and in general. At the same time, further interest might develop in preserving the natural beauty of places like Mustang and Everest so that these are still attractive and can be enjoyed by extreme sports participants from around the world also in future.

Interested in joining an extreme sports event in Nepal? Check out these links:

Trail Running Nepal, including an event and races calendar as well as a trail runner’s blog.

Mountain Biking Worldwide, including package tours with guide to all the great mountain biking destinations – both more and less extreme.

Paddle Nepal – a place to start planning a kayak or rafting trip.

Namas Adventure, all kinds of expeditions, including trekking and motocross.