Comparison to another Difficult Airport

Funchal airport on the Portuguese island of Madeira is still known as one of the most difficult airports in the world. It’s always difficult to compare. But some key similarities between Funchal and TIA do stand out. This is interesting to note as Funchal has nowhere near the same issues with delays and cancellations as does TIA. The table below shows that Funchal shares key characteristics with TIA, including only one runway, common weather problems and no instrument landing. One major difference, however, is that Funchal has implemented a major expansion project that has greatly enhanced terminal capacity and efficiency. TIA, on the other hand, has been deprived of almost any expansion and renovation for years. This and other factors would be as important as the difficulties included in the comparison below. 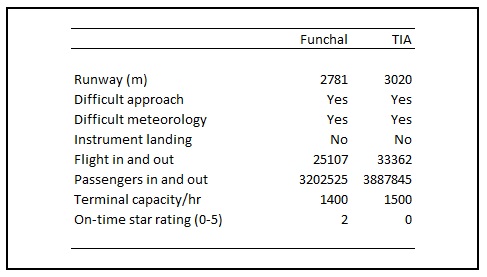