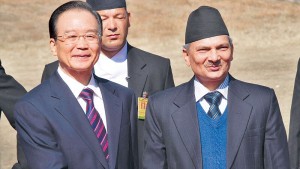 Since the end of the Maoist conflict: Chinese investment and trade is only going up

India is by far Nepal’s biggest foreign investor and trading partner historically. But China is catching up more than ever. Last year, Nepal’s big neighbour to the north invested more money than India for the first time! In addition, though India is still ahead in commerce, accounting for 53 percent of Nepal’s foreign trade, it’s share is down from 60 percent in 2006, while China’s share is up from just 3 percent to 31 percent! In other words, since the end of the Maoist conflict, Chinese investment and trade in Nepal has been going only up. How is that visible out in the districts? Well, here are the latest major examples.

The Chinese flag now waves over construction sites in several districts. Take the local airport in Bhairawa near Lumbini. Just a small airport for local planes until now, it’s about to be upgraded to Gautam Buddha International Airport with a three kilometres runway and a capacity to receive 750,000 passengers a year! The Chinese government backs the project with a USD 3 billion budget – and the contract was just awarded by Nepal’s Civil Aviation Agency (NAAC) to China’s Northwest Civil Aviation Airport Construction Group. 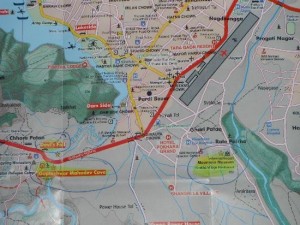 Pokhara is set to have an international airport too. As it stands, Chinese Exim Bank has pledged to fund the project – which amounts to an initial budget of USD 216 million. Meanwhile, NAAC has already pointed at China CAMC Engineering Co. as the likely contract holder. How will two international airports – Lumbini in a populated part of the Terai, and Pokhara in an already growing Hill district – affect economy and life in these local communities? Well, for starters Chinese tourism is on the rise, up three times since 2011 to over 70,000 last year, and it seems poised to shoot up in these two districts too. Who knows what else might happen! 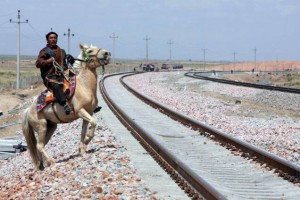 On the Tibetan plateau, China is extending railway links to the Nepalese border

But airports and tourism are just part of it. China is also extending railway links to the Nepalese border, making access for traders trying to use the northern border faster and easier. There’s a lot of new road construction underway, envisaged to revive the old Silk Route from Tibet through Nepal to Pakistan, with several projects in process and others on the drawing board. Indeed, Chinese money is helping to upgrade border posts in places like Kerung and Timure, so far lying dormant on the northern frontier in lack of adequate infrastructure and manpower. Now they are being upgraded to handle more frequent commercial traffic, and Chinese money is even funding the construction of an Inland Container Depot – or dry port – at Timure (near Langtang). 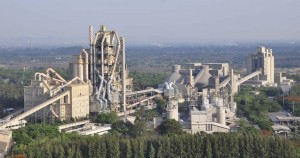 Chinese investment in Nepal ranges from hydro-power to noodle factories – but also to one of the biggest cement factories in the country! With a 70:30 equity division, Globalcement.com reports, China’s Hongshi Holdings Limited and Nepal’s Shiva Cement have made a joint venture worth USD 300 million. Ram Sharan Mahat, Nepal’s current Finance Minister, calls the deal a “landmark” in expanding the already growing economic ties between China and Nepal. Locally, the investment also means at least 2000 new jobs! Up in Dhading northwest of Kathmandu, an old run-down metal plant – the state-owned Nepal Metal Company Ltd. – just got taken over by two other Chinese investors who are infusing an initial USD 20 million, reviving local jobs and production. 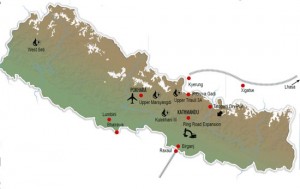 India’s equally accelerating investment in Nepal can indeed be seen as a response to China’s advances from the north. Hydro power is a key example. China’s Three Gorges Corporation has invested in a handful of projects, including the 700MW West Seti Dam in Doti, while India has just signed on to develop the massive Arun III in Sankhuwasabha in the east. In fact, last fall the biggest foreign investment ever made in Nepal was signed by India’s GMR Group to build a 900MW hydro-power plant in Karnali. 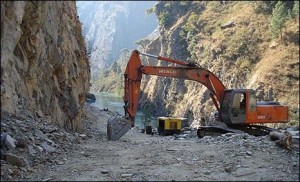 But the Chinese ambition of reviving the old trade-routes through the Himalayas to the markets of South Asia means one thing above all: more roads. China is even funding the ongoing ring-road project in Kathmandu – expanding the congested artery around the city from four to eight lanes – making transportation in and out of the capital easier and quicker. Meanwhile, India is investing in roads too – and more roads through more districts can mean more long-term economic activity also locally. Situated in between the two rivals, are local communities set to see such positive economic effects? Well, it remains to be seen. But it’s clear that – for better or worse – Chinese investments (and Indian) are changing the landscape of local Nepal.