The National Reconstruction Authority (NRA) has been without CEO for over a month now since its former chief, Yuba Raj Bhusal, was dismissed on July 4. As always in the context of Nepalese government, this means that little work is being done: no chief at the helm usually means low activity, as the chief must approve all but minor decisions. 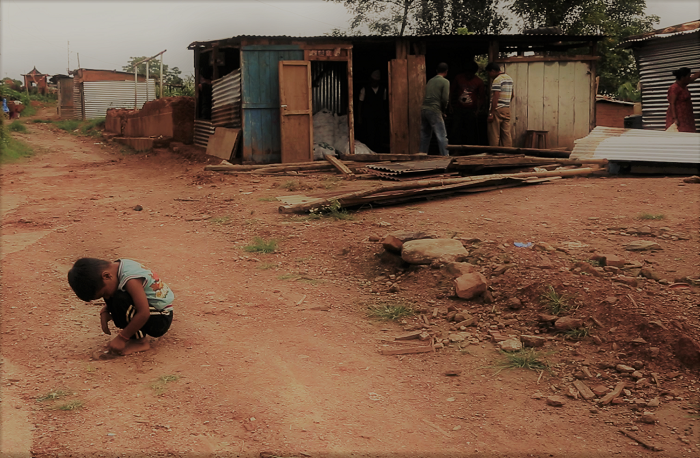 Still waiting for the NRA: thousands of households continue to live in tin shack and other temporary housing

But why the delay in appointing a new CEO, so central in implementing government and donor reconstruction programmes? Well, what’s known is that two candidates are lobbying with prime minister, Oli, and he has yet to decide on one. Until then, not even the weekly NRA Executive Committee meetings approving most decisions can be held.

“If the NRA is to function effectively, an eligible CEO should be chosen through open competition and allowed to work without political intervention.” Staff at the NRA.

Bhusal was dismissed without due process, by the way. Not that it really matters but still, it does suit any government to follow the rules. According to the constitution, the government can dismiss the NRA CEO but only after giving him a chance to defend himself. Former CEO Bhusal did not get that chance but simply received a letter saying he had to go.

Bhusal was in fact dismissed as part of a big round of cleaning up the ranks appointed under the previous Deuba-led government. 300 officials appointed by former prime minister, Deuba, and therefore seen as affiliated with his party, Nepali Congress (NC), were dismissed on July 4. Whether Bhusal had performed well or not was of little concern.

What’s the number of CEOs who have presided over the NRA so far, then? Well, since the NRA was formed in the summer of 2015, its CEO has been dismissed four times, including Bhusal. The CEO is officially appointed for a five-year term, but none of the holders of this coveted position have made it much past one year until now, as shown below. 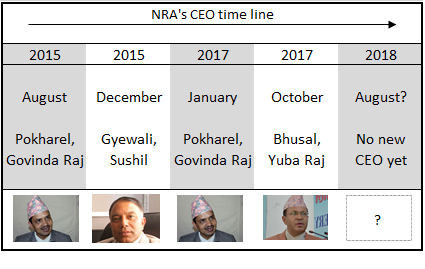 The NRA’s cut-throat CEO timeline: Year and month of each CEO assuming office

Due to Bhusal’s dismissal most reconstruction activities under the NRA have come to a grinding halt. Ministry of Finance just allocated 1,52 billion rs. (USD 13,5 million) to the NRA who, however, cannot spend any of it simply because there is no CEO! Various donor-led programmes have hit the wall too as they cannot proceed without official NRA approval.

Hostage to the instability at the NRA are indeed several hundred thousand households who have yet to rebuild their homes. Roughly half of the approximately 750,000 eligible households have yet to get a proper roof of their heads. Why more houses are not yet rebuilt is a result of many factors. But one factor may indeed be disruptions at the NRA.

Says an official at the NRA: “If the NRA is to function effectively, an eligible CEO should be chosen through open competition and allowed to work without political intervention.” No position, however, seems too holy for Nepal’s parties to subject to political interference, not even when the plight of already hard-tried earthquake survivors is at stake.