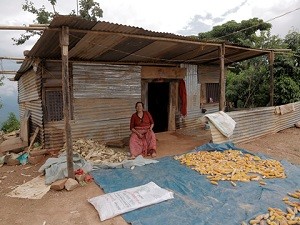 Waiting for the NRA’s reconstruction grant: one of 600,000+ households who still got little or nothing to rebuild their homes

The formation of Nepal Reconstruction Authority (NRA) in the fall of 2015 was as political as the creation of many other “high-level” commissions and agencies in Kathmandu. Barely had donors pledged over 4 billion dollars in reconstruction grants and loans before the main parties started to bicker over who was to chair the NRA. The CEO of the new agency would come to manage – together with the Prime Minister – a huge sum of money. Was it to be Nepali Congress’ (NC’s) man, someone closer to the UML, or maybe someone affiliated with the Maoist party, or…? 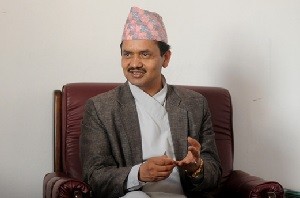 The Nepali Congress-led government’s choice in summer 2015 fell on, well, NC’s long-time party worker at central level, and vice-chairman of the Central Planning Commission at the time, Govinda Raj Pokharel. He had high-level planning experience – and so, it did not look like a purely political appointment. But NC he was. Then, as Pokharel was just getting the nascent NRA machinery off the ground and ready to assess the damage, political manoeuvres in parliament led to his downfall – and UML’s man for the job, Sushil Gyewali, took over the NRA. 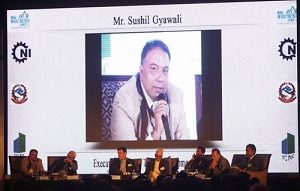 Sushil Gyewali started in December 2015. But last week – in early January 2017 – he was sacked by the cabinet and replaced with, yes: NC’s Govinda Raj Pokharel, yet again! As the ever changing tides of power and influence between the parties in Kathmandu rose and fell, NC’s favourite man on the post, Pokharel, now got a second run. The official reason to sack Gyewali was that he had failed to speed up the reconstruction process. Forward the process did move, but at snail speed, as many earthquake victims that we have met would indeed agree.

Under Gyewali the NRA did not achieve its perhaps first and foremost objective: to distribute reconstruction grants to the more than 600,000 households who lost their homes in the earthquake in April and May 2015. 500,000 still live in tin shags! Only a month after the devastation – now almost two years ago – the government pledged ultimately 300,000 rs. in reconstruction grants to every affected household. However, promises proved to be one thing, action quite another. Until now (January 2017), only 450,000 households have received any money and just a meagre 50,000 rs.! 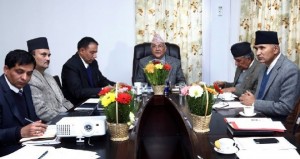 Many preparations but little distribution: another meeting at the NRA.

What happened to the rest of the 300,000 rs. for every household? Well, the release of the money is awaiting a quite bureaucratic registration and application process. The NRA has spent most of its time and resources on two massive household surveys and on creating a system of local offices, forms and bank procedures to channel out the grants. In short: many preparations but little distribution. All the more frustrating is it for many victims to see that leaders in Kathmandu still seem more interested in who is CEO of the NRA than what it’s doing.

Is the appointment of NC’s man, Govinda Raj Pokharel, as new CEO a mere “political” appointment, or could it be a sign of urgency in government circles to want to speed up the distribution process. Indeed, is his appointment a turning point after which the 600,000 earthquake victims will finally get the reconstruction grants in their hands to rebuild their homes? Well, as Pokharel sits down behind the desk at the NRA headquarters, some may be hopeful – and many, to be sure, will be watching.

PS: Few days after his removal, Gyewali took his case to court, arguing that he was sacked for “political reasons”.