Home Earthquake The NRA’s local offices: an issue in the making?

The NRA’s local offices: an issue in the making?

The NRA just allocated 290 million rs. to create seven local offices under it – is that a “good thing” or…?

The National Reconstruction Authority (NRA) which finally “took off” on December 26 after a six months delay has now allocated some of the USD 4,4 billion supposed to be spent as quickly as possible on rebuilding houses and public infrastructure. So, what’s the allocation going to be spent on – so far an amount of 290 million rupees? Well, in one word, “administration”: the NRA is setting up seven local offices which it needs to plan and implement the reconstruction. 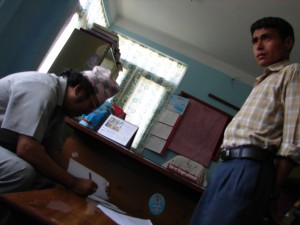 Ministries already have offices at district level – or “line agencies” (picture) – and there are local bodies – DDCs, VDCs and municipalities – too

Is it a big deal that seven local offices – with staff, vehicles, equipment, and budgets – are now to be created and added to the existing bureaucracy? Well, it would appear that these offices are necessary: the NRA says they need six offices to cover the fourteen worst hit districts and one for another seventeen less affected districts. But it triggers a de-ja-vue from the earliest days of administration in Nepal when new offices are created at sub-central level where many offices exist already. The sector-ministries all have “line agencies” in the districts, and local government bodies are out there, too! 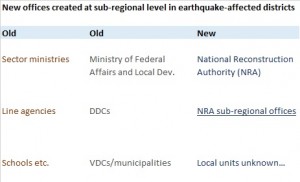 Why is it necessary to create a new parallel structure of local authority? The new NRA sub-regional offices shown next to the old structures

Why is it necessary to create a parallel structure of local authority in order to work? Well, it remains to be told and known in detail. At least, we are not sure about it yet, so we raise the question here. When new offices are created at local level, even if they – as the NRA’s offices – cover two or more districts, a classic problem in Nepal of “overlapping authority” could easily occur. Indeed, to the extent that, say, Ministry of Education’s line agencies and the NRA’s local offices are both working on building schools, who’s to say how well they will coordinate?! 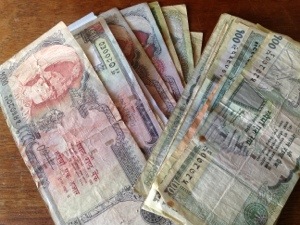 Who will handle the reconstruction money at local level: the line agencies, local bodies and/or the NRA offices?

In fact, based on previous experience in Nepal, one could even ask: who’s to know whether these offices – falling under different central-level headquarters in Kathmandu – won’t start competing for power, influence and budget to determine where money is spent and in whose favour? After all, these questions frequently matter quite a lot in the affairs of government, parties and administration in Nepal, as noted in our Crash Course on Local Politics. The NRA represents a huge sum of money. Is this money going to be channelled through existing district and village level authorities; or is it going to be in the hands of the NRA and its new local offices?!

The answer is indeed unknown as of now. Perhaps there is no need to worry about it: it’s possible that the authority of the NRA and its sub-regional offices will be clearly separated in words and deeds from those of the ministries’ line agencies and the local bodies. But even then, why not strengthen and work with the existing local offices instead of creating a parallel structure? We raise this issue simply because it’s hard to ignore the possibility that it might erupt. It’s positive that the NRA finally got off the ground but only the next months will show how well it works in practice, also at local level.

Why not work with local government where there is an element of local accountability under the LGCDP’s system of annual performance assessments conducted by independent auditors? Well I think you touch on the reasons – control of resources, centralised power, competition with other ministries, and national political party interests. Nice piece.

Exactly. Years of work have been put into strengthening existing local authorities – including mechanisms of accountability and transparency, which would be extremely relevant to utilize and build on as large funds begin to flow out to the earthquake-affected districts. Great comment.