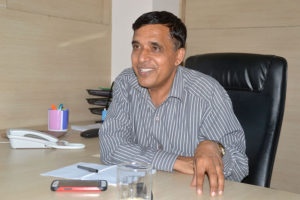 Balananda Poudel, chief of the Local Bodies Restructuring Commission, was just about to complete its assignment when… (pic: myrepublica.com)

It’s decided with the new constitution that the VDCs – the local bodies at village level – have to be replaced. But exactly when and how is still unknown. The only certain thing is that there “will be a delay”, says Balananda Poudel, chief of the Local Bodies Restructuring Commission.

The new constitution provides for three tiers of government: below the central level is the “provincial level”, the boundaries of which are still undecided, and the “local level”, undecided too. All that’s agreed is that the local units must be fewer and bigger than the current VDCs.

The Commission had just recommended – based on “objective criteria” like population and economy – to replace the over 3,000 VDCs with 565 bigger local units when the three main parties, NC, UML and the Maoists, changed the terms. They now want the local units to follow the boundaries of the existing 925 Ilakas (most Ilakas consist of 3-5 VDCs), and so Poudel and his team have to rewrite.

The consequence of this delay in the process? Well, agree with the new terms or not, no decision on the restructuring of future local bodies is now likely before March 2017; local elections are therefore also not possible in the spring as otherwise planned; and implementation of the constitution with respect to local bodies will not be completed in any near future. Check out these links for a full brief: