Home Local politics Lawmakers still focus on their own constituencies

Lawmakers still focus on their own constituencies 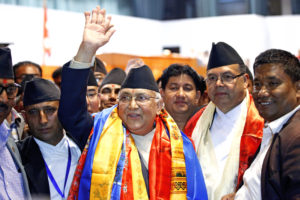 Now and then, news about political disputes in Kathmandu gives a hint about actual practices within the leading parties in the country. This time, it’s a story about dozens of disgruntled lawmakers from the governing party, CPN, who currently feel neglected by their own party leaders. One of the lawmakers, Bhim Rawal, recently opposed his own prime minister, K. P. Oli, during a heated debate in parliament on the national budget, as he stood up and said:

“The party has become minister-centric as opposed to people-centric.”

So, what does that mean? It means, Bhim Rawal explained, that the Prime Minister has allowed his ministers in the government to use budgetary resources for the purpose of favouring their own constituencies instead of sharing the budget with all lawmakers within the CPN party so that all get a share for their constituencies. Rawal, and sixty-or-so fellow CPN lawmakers, complained that ministers serve their own electorates as opposed to giving fellow CPN lawmakers an equal share in the budget for their respective constituencies. He added:

“The government did not allocate a budget for the 750MW West Seti Hydropower Project, but earmarked budgets for ministers’ wards [instead].” 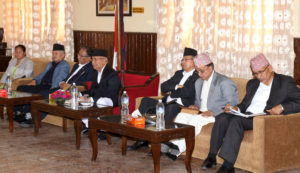 PM Oli at his residence, talking to disgruntled lawmakers from his party. Photo: RSS.

This protest grew so loud that Prime Minister Oli had to call the disgruntled lawmakers to a meeting on Sunday to calm things down. If lawmakers continue to openly speak against party decisions in Parliament, it will be like “giving ammunition to the opposition parties”, Oli cautioned. He urged the lawmakers to instead maintain party discipline and settle the issue “internally” within the party. Co-chairman, Prachanda, even promised to look at the budget again:

“I respect your aspirations and demand for judicious development of all parts of the country. We will try our best to address your concerns.”

If past experience is anything to go by, however, chances are that the disgruntled lawmakers in the CPN will not all get a “fair share” in the budget for their respective constituencies. Part of the reason has to do with “favouritism”. Indeed, favouritism in Nepali politics is a practice which in no small part involves politicians in power who favour their own constituencies at the expense of other politicians – even from the same party – and their respective constituencies.

To be sure, the budget is officially supposed to be allocated according to formal plans and policies. The distribution of the government budget is formally guided by criteria such as “where the budget is most needed” or “where the most people benefits”. However, a practice of favouring “one’s own constituency” has always weighed heavily on the decision-making, and the current dispute within the CPN only shows that this practice is still very much alive! 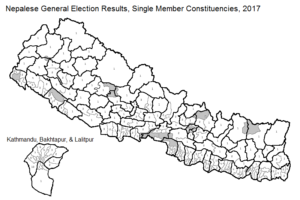 The issue at hand: lawmakers focusing on their respective constituencies.

In April, Prime Minister Oli pledged to not tolerate corruption of any form and to strengthen democracy in a “real sense”. But when ministers favour their own constituencies; when law-makers evaluate the government budget by the size of the share for their respective constituencies; and when the Prime Minister says that the issue of allocating the government budget is to be settled “internally” in the party, can that ever evolve into a “real” democracy?

For more on the practice of favouring “one’s own constituency” in Nepali politics and the potential consequences, jump to the relevant sections in our Crash Course on Local Politics in Nepal. The crash course currently needs an update as the formal system of local government has changed. But the informal “system” of doing politics seems to have changed much less, as the current dispute within the party now in power, the CPN, only illustrates with great clarity.

“The past appears to live on in the present.” Comment by a local politician in Kavre district on political practices in Nepal around 2002.