Home Local politics Ethnic delineation – would it work in a VDC?

Ethnic delineation – would it work in a VDC? 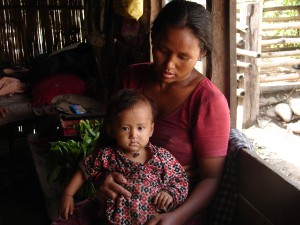 An ethnic state for the next generation?

There are many maps suggesting how to delineate future ethnically based federal states in Nepal. The “Tharu state”, the “Newari state”, the “Madeshi” state – all these names are on the table and more. Will it work to sub-divide the territory of a country, which has more than 60 ethnic groups, using the criterion of “ethnic majority” instead of administrative considerations? Well, it is indeed a difficult question, and that’s precisely why it does seem important to discuss it. One could be reminded of the old Greeks who said that every whole is made up of its smaller parts, and only by being closely familiar with the smallest parts can we understand how the bigger whole works. Why not consider the question of “ethnic delineation” from this old perspective? Indeed, let’s look at the (almost) smallest parts of the territory of Nepal: the areas of the Village Development Committees. 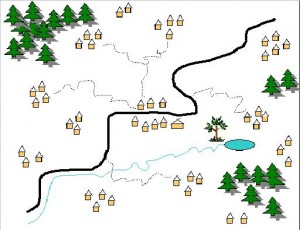 A basic sketch of a VDC

Would the criterion of “ethnic majority” lead to something good if applied within the boundaries of a Village Development Committee: a VDC? Well, let’s first look at a typical VDC and consider what this sub-division of the territory looks like. First of all, there are almost 4,000 VDCs in Nepal altogether, roughly the same number as the Village Panchayats in the past. True enough, VDCs vary greatly in size and population, but in general they tend to be comprised of one or two dozen villages which lie some near, others far from the main village or small town of the area. Typically, this is where the visitor will go to find the VDC office, the secondary school, the main health post, and most of the local shops and restaurants. In fact, a VDC has in a sense a “capital” of its own, and the main road of the area usually runs through it, connecting the VDC to the outside world. We have inserted a sketch of a VDC above. Take around 4,000 of them, line them up against each other within the national boundaries, and you have a good image of much of Nepal!

How would the “ethnic delineation policy” work if we applied it to a VDC: if we gave some sort of predominance to the biggest ethnic group over the others? It’s of course a hypothetical question, but we think it’s worth considering, for one main reason: if the policy could work within a VDC – the (almost) smallest part of the territory – it might also work within larger entities such as the future federal states, just as the opposite might also be true! Why not consider the question, then, by taking a concrete example. Again, no VDCs are entirely alike – in fact, they vary greatly in many respects – but an example of a VDC can always help to illustrate. So, below is a rough sketch of a specific VDC which we visited in Kavre east of Kathmandu some time back. It’s typical of many other VDCs in that district: quite hilly with slopes and valleys and with villages situated around the main village. And just like many other VDCs, it also carries another typical characteristic: the VDC had a great ethnic diversity. What would happen, then, if we gave the VDC to the biggest ethnic group? 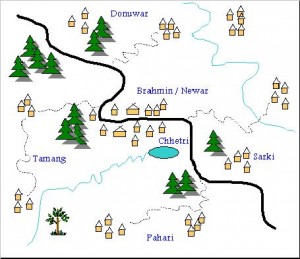 The VDC in Kavre – an ethnic landscape

Well, to consider what would happen we would first need to know which the biggest ethnic group was. Indeed, at the time we visited, the locals could readily outline the ethnic groups in the VDC and their settlements in the landscape. One villager brought us to a ridge and laid it all out for us. “Down in that village you’ll find the Sarkis”, he explained, pointing towards a cluster of houses on the southern slope. “And see the two villages out there? That’s where the Tamangs live.” We then turned around towards the northern slope: “Look at the hill a bit farther out: that’s the Pahari village.” The main village, the local continued, was inhabited by a mix of Brahmins and Newars, give and take a few Chhetri households, and the Donuwars lived in the valley below. It was in short a patchwork of ethnic groups. But which was the biggest? The locals were not agreed, but luckily statistics at the VDC office soon resolved the matter: the Brahmins and Newars shared the position! Then came the Tamangs, the Paharis, and the Chhetris, followed by the Sarkis and the Donuwars. 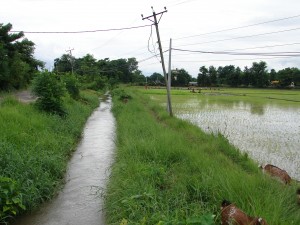 So, the Brahmins and Newars made up the biggest ethnic groups. It would now be quite straight-forward to name the VDC, wouldn’t it? It would of course be a “Brahmin/Newar VDC”! What, then, if we did give predominance of sorts to the Brahmins and the Newars over the other ethnic groups? Surely we would make such a decision in order to benefit the locals. But how would it benefit them, in case we went ahead and made it a “Brahmin/Newar VDC”? Well, maybe it would solve one of the big problems in the VDC in Kavre: a lack of VDC budget. The VDC did not have enough resources to address even half of the local development needs. Would giving some sort of local predominance to the Brahmins and Newars help to solve this problem? Perhaps. However, considering the reluctance of leaders in Kathmandu to talk about actual transfer of power and resources to the local level, we are not sure. Or let’s take another issue in the VDC in Kavre: an unequal distribution of local development projects. Many villagers complained about the leaders favouring their “own people” over the community as a whole. Would this tendency of “favouritism” go away by making it a “Brahmin/Newar VDC”? Again, maybe not.

What, then, might be achieved by giving predominance to the Brahmins and Newars? Well, some would say that “ethnic delineation” of the territory in general would change everything. Some would even suggest that such a policy could lead to more fruitful dialog and cooperation between local leaders and their various support groups. However, in the VDC in Kavre, would local leaders and their ethnic groups – Brahmins, Newars, Chhetris, Tamangs, Donuwars, and so on – become better at resolving local issues together if making it a “Brahmin/Newar VDC”? If the answer is “yes”, well then it might be good to delineate also federal states on the basis of ethnicity. Who knows, over the years, such a delineation might even solve other pressing problems in the society, from lack of jobs to land scarcity and more! But what if the result of ethnic delineation within VDCs were instead conflict and division, and if many other issues also remained unsolved? In that case, perhaps we should recall what the old Greeks said: that every whole is made up of its smaller parts. If we think “ethnic delineation” would not work within the smaller parts of the territory – the VDCs – it might indeed also fail within larger entities such as federal states. Indeed, who knows what would actually happen. It’s anybody’s guess. But we’ll put it this way: if you think ethnic delineation will work in a VDC, go ahead; if not, please think twice!

PS: Wonder what the locals in the VDC in Kavre might actually think about ethnic delineation today? We got curious too remembering our visit, so soon we’ll go back and ask them. Register for a heads-up on our report!