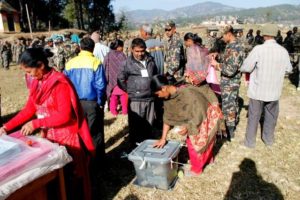 Typical scene from the May 14 local election: peaceful voting in general, says EC

Initial Election Commission (EC) figures suggest a huge voter turnout: 71 percent! But was it a peaceful local election on May 14? In general it was, says the EC in a preliminary status of this first phase of the election process.

Indeed, reports on violent incidences are relatively few so far. The local election covered 34 districts – the rest of Nepal’s 75 districts are slated for local elections on June 14 – and (only) in four of these districts was violence reported: 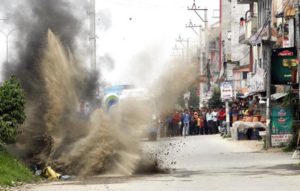 BHAKTAPUR: Early Sunday morning, a socket bomb – one of many leading up to the election – was found near the residence of UML mayoral candidate for Madhayapur Thimi Municipality, Madan Sundar Shrestha, and was detonated by an army bomb squad. 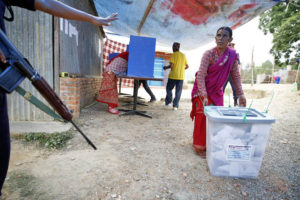 Security was tight at the polling stations but booth capture and theft of ballot boxes did occur (photo: Skanda Gautam)

DOLAKHA: UML candidates and their supporters blamed NC and Maoist-Center candidates and cadres of capturing the election booth, preventing UML supporters from casting their votes and even from reaching the polling station. In one ward, police fired shots and a woman sustained minor injuries.

DOLAKHA: In the Melung Village Council area, police opened fire when NC and Maoist Center cadres attacked police to capture the election booths at the polling station. One man was shot and killed as a result. Locals told journalists in Dolakha that other people were injured in the incident as well. 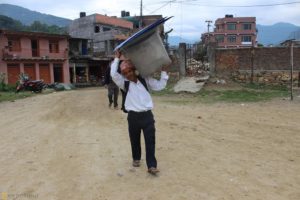 In Kalikot, ballot boxes were stolen after voting was done, in a situation like this one (photo is from Lamjung district)

KALIKOT: Two persons were injured when Chand-Maoist cadres clashed with police in Malkot Village Council and police opened fire. Throwing stones at the police, the Maoist cadres were trying to capture the ballot boxes and set fire to them.

KALIKOT: An unidentified group – suspected by police of belonging to the Chand-Maoist faction – robbed the ballot boxes in the Naraharinath Village Council area as plainclothes police were bringing the ballot boxes to the counting station. The police officers involved have gone missing as well.

In the evening on May 14, the UML asked the Election Commission to arrange for re-election in a number of districts (the names of which are not known to us) where – the UML claims – election booths were captured and voters were put under threat.

To this account should also be added violent incidences during the days leading up to the election: 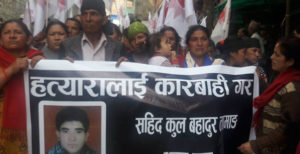 DOLAKHA: On May 9, Kul Bahadur Tamang, son of a local UML Ward Chairman candidate, was attacked and killed by Maoist Centre cadres in the Gaurishanker Village Council area. A total of 49 local cadres have been charged with involvement in the incident.

RUKUM: On May 9, Maoist Centre and UML cadres clashed in Musikot, leaving three injured. Police fired three rounds in the air to disperse the agitated crowd. Earlier on that day, police fired warning shots at a nearby Sanibheri Village Council polling station as well. 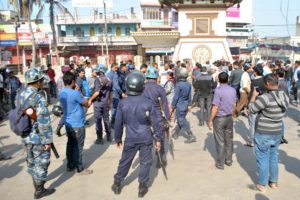 NAWALPARASI: On May 10, a bomb went off during an NC campaign speech at Purano Kawasoti Bazaar. The bomb exploded while Amrit Shrestha, an NC ward chairman candidate, was addressing a crowd, and everybody subsequently fled the area.

NAWALPARASI: On May 10, police recovered and disarmed socket bombs at the houses of three mayoral candidates in the district. The bombs were found at the houses of Maoist Center candidates, Durga Dutta Dhungana and Dansiram Bashyal, as well as UML mayor candidate, Bhimlal Adhikari, in Madhyabindu municipality.

SYANGJA: On May 11, a socket bomb was recovered at the residence of NC mayoral candidate in Galyang Municipality, Lal Gopal Aryal. The bomb didn’t go off, says police, because it was wet from the rain.

BHAKTAPUR: On May 12, a cylinder bomb exploded in the Changunarayan Municipality area right in front of the residence of RPP leader, Madhav Khatri. Eight window panes in Khatri’s house were shattered.

BHOJPUR: On May 12, a UML cadre, Sharda Tamang, was shot at with a rifle while out for an evening walk by a Maoist Centre cadre, Ekindra Bhujel, at Helaucha in Bhojpur municipality.

JUMLA: On May 12, a bomb exploded at a polling center near Bhairab Secondary School in the Sinja Village Council area. The incident happened at night.

HETAUDA: On May 12, an unidentified group – possibly Maoist Chand cadres, police says – abducted a Maoist Center ward chairman candidate in the Manahari Village Council area, Ram Kumar Uprety, while he was leaving home to go for a walk.

DHANGADHI: On May 12, the army defused two bombs planted at two separate locations in downtown Dhangadi. Police suspect Maoist cadres led by “Biplov” to be behind the bombs with the aim of spreading fear among voters.

Will election violence play a role in the local election on June 14 as well? Indeed, the potential for violence seems greater in the Terai district, given the Madhesi issue, but hopefully the generally peaceful conduct on May 14 – albeit incidences did occur – will come to inspire the second phase.